Above: Christine Argillet with Salvador Dali


About Salvador Dali: The Argillet Collection

Above: Christine Argillet, daughter of Pierre Argillet and head of Salvador Dali: The Argillet Collection.

As I embarked on my journey, both to curate and to present my father’s collection, I was asked to remark as to the “overall message I would wish to convey” through my presentation. I interpreted this question as the interviewer seeking a definition... could I define that moment... that feeling... that responsibility of being truly the only direct archive to the fifty-year-long collaborative efforts of Salvador Dali and Pierre Argillet?

My answer came to me quite quickly, and without hesitation.

This presentation of DALI: The Argillet Collection is a tribute to the work of my father, Pierre Argillet, as an extraordinary publisher of the Dada and Surrealist group.  This collection reflects a constant endeavor, a very personal archive of not only Dali’s finest etchings and tapestries, but an intimate glimpse into my family’s personal and cherished photos, films, anecdotes and memories of life with Dali and Gala.

This exhibition truly is an intimate collaboration of my family’s with the most fascinating Artist of the Surrealist Movement.  It is with honor and humility that  we, the Argillet family, are able to present to you this extraordinary assemblage of Dali’s works.

My father began as a journalist with a true passion for Surrealism.  His relationship with Dali was as sincere as it was passionate.  They had together long discussions on the art in process and on literary topics that Dali would then illustrate.  Dali was a man who saw the world as one in which everything was linked.  That view of the world is evident in each and every piece of his art, for him it was never a progression of the idea that all things have a shared link...it was the common denominator...Dali’s philosophy...if you will.  I observed and came to recognize this world view of Dali’s from childhood.  I see this theme in all of my family’s Collection, and we speak of it often.

This special relationship between me, my family and Dali, and the bond of my father and Dali, created this very unique Collection known as Dali: The Argillet Collection.  It has defined my work, my journey from childhood to maturity, and my family history.  Friendship and complicity, as life would dictate.

The Argillet family also acknowledges with gratitude the professionalism and extraordinary efforts of Nim Vaswani and the Road Show Company as presenters of this Collection.  They truly are the industry standard in their category of traveling Art Exhibitors and have embraced myself, my family, and my heartfelt efforts with this project.  They have seen it quite as I do; a labor of love and a tribute to two men whose contributions and dedication to their art shall live on forever. 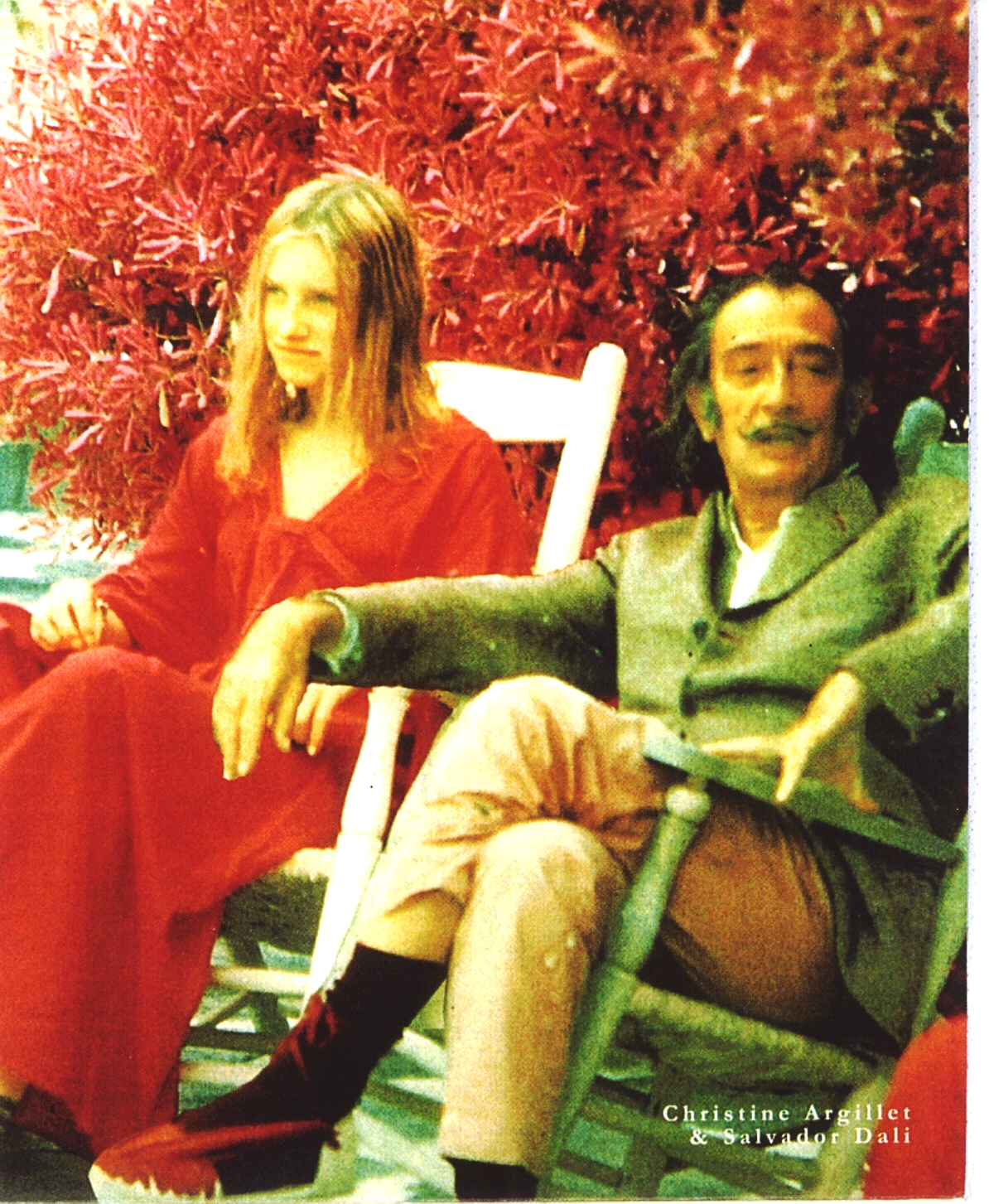 Above: Christine Argillet with Salvador Dali

Spanish painter; born in Figueras, Catalonia, where he died in 1989. Trained at Madrid’s school of fine  arts, he was drawn simultaneously  to Academicism, Impressionism,  Futurism, and Cubism; after reading Freud, his passions turned to dreams and the unconscious.

In 1928, he met Picasso and Breton  and joined the Surrealists. He also met Gala Eluard, who became his companion and muse. In 1929, he began formulating the “paranoid-critical” method, which would provide the foundations for most of his paintings.

After a stay in the United States from 1940 to 1948, where his influence was felt on fashion, advertising, and ballet sets, he went back to Spain to undergo a religious crisis and returned to the baroque traditions and landscapes of his youth, in harmony with his temperament.

It soon became apparent, however, that there was an inherent contradiction in Dalí’s approach between what he himself described as ‘critical paranoia’ - which lent itself to systematic interpretation - and the element of automatism upon which his method depended. Dalí’s extreme statements on political matters struck a false note in the context of the Surrealist ethic and his relations with the rest of the group became increasingly strained after 1934. In the eyes of the public he was, increasingly as time went by, the Surrealist par excellence, and he did his utmost to maintain, by way of excessive exhibitionism in every area, this enviable reputation. 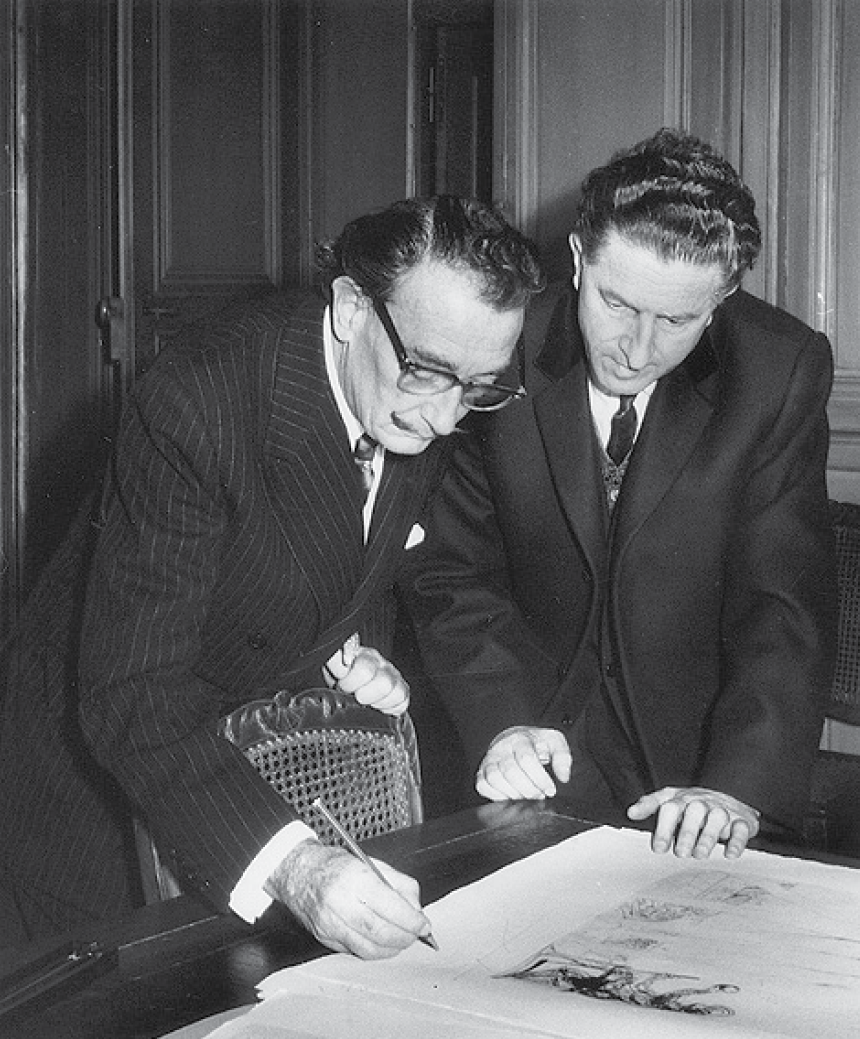 Above: Pierre Argillet with Salvador Dali (1963)

Pierre Argillet was an avid collector of works by futurists, dadaists and surrealists, and very early on, met the major artists of the 20th century. In 1930, at the age of twenty, Argillet was deeply impressed by the “Chants de Maldoror” of Lautreamont. He began a spiritual journey along a path that was originated by Rimbaud and later pursued by Lautreamont, Marinetti, Andre Breton, Tzara and Chirico. He counted Duchamp and Jean Arp among his acquaintances, but when he met Dali, complicity led to a life-long friendship that lasted until the painter’s death in 1989.

Be it luck or fate, Dali’s delirious vision led to a long and fruitful collaboration between artist and publisher. They produced nearly 200 etchings. To name a few: la Mythologie (16 planches), le Christ, Sainte-Anne, l’Incantation. In 1966, Dali reworked 7 pieces of the Bullfight set of Picasso, giving them the Dali touch.  He continued to reinterpret the works of his fellow Catalonian, overlaying them with his macabre, yet humorous vision. He ridicules bishops’ benedictions. Images hidden in the crowd and arena suggest the skull of a bull fighter. In another etching, a galloping giraffe catches fire as if in a tragicomedy. His subjects vary from windmills, parrots, fish and a statue of a woman occupy another  arena. In 1968, Dali illustrated “la Nuit de Walpurgis” of Faust (21 pieces)  using rubies and diamonds as engraving tools, a technique that lent an incomparable delicacy to the design; next came the “Poemes” of Ronsard  (18 pieces) and Apollinaire (18 pieces). In 1969, Dali created “Venus In Furs” after Sacher Masoch (20 pieces), and between 1970-71, the Suites of Don Juan  (3 pieces) and Hippies (11 pieces).

In 1974, artist and publisher parted their ways. Pierre Argillet would only accept etchings done in the traditional way, on copper, and refused to go along with Dali’s desire to make photo-based lithographs. But by using this process, Dali went on to produce a large number of works that appealed to a more widespread audience than ever before, but they were also subject to more criticism.

The Pierre Argillet Collection demonstrates high standards of quality, and the empassioned collaboration between an artist and his publisher. This ensemble of works has appeared in the best-known museums in the world. Musée Boymans, Rotterdam 1971; Musée Pushkin, Moscou, 1988; Reynolds-Morse Foundation, St Petersburg, Florida; Kunsthaus, Zürich and Staatsgalerie, Stuttgart 1989; Isetan Museum of Art in Tokyo, Daimaru Art Museum, Osaka and the Hiroshima Prefectural Museum of Art, Japan, 1990. This collection’s permanent home is at the Museum of Surealism in Melun, France and the Dali Museum in Figueras, Spain.