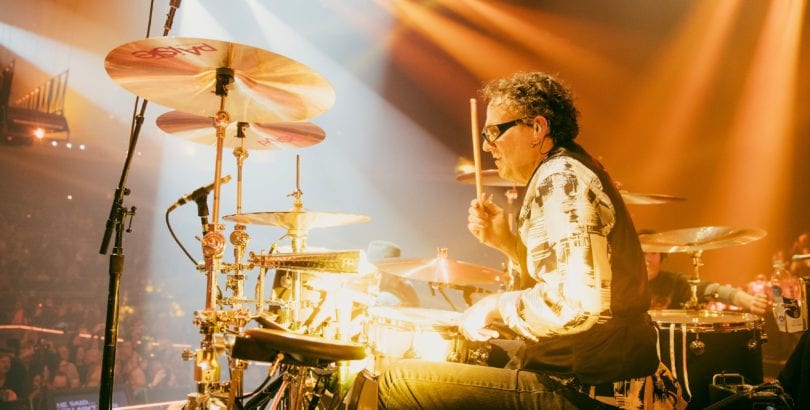 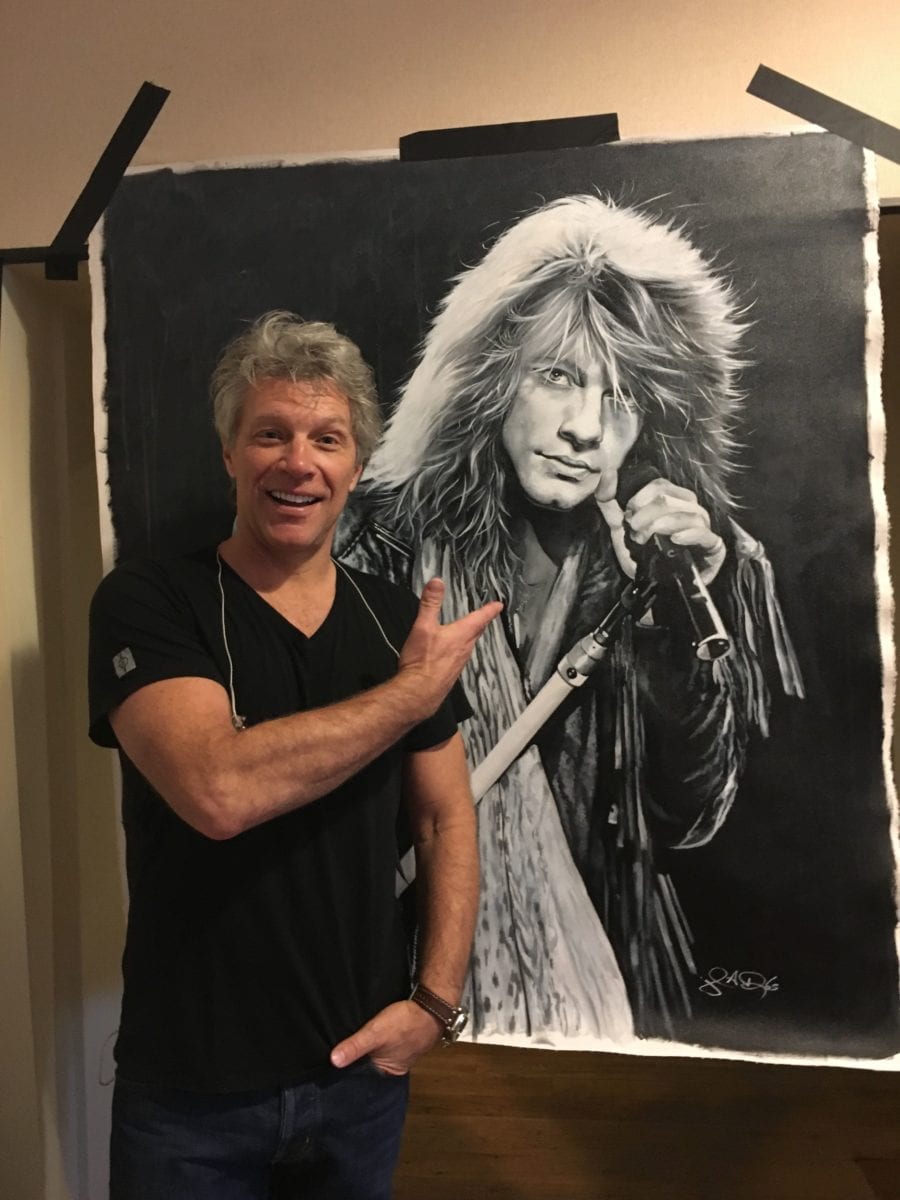 Fresh off drumming with Aerosmith at the Grammy’s and performing at the prestigious MusicCares where Aerosmith was honored as the Person of the Year…John Douglas has been getting ready to continue his 2021 North American Art Tour…and what better place than Destination Tampa Bay ™ at the Michael Murphy Gallery.

The Michael Murphy Gallery, Tampa’s premier fine art gallery, Michael Murphy Gallery announces their presentation of John Douglas’ “High-Performance” Fine Art Tour: in its’ limited engagement:  March 30th through April 4th 2021, with live appearances by Douglas on Friday, April 2nd from 6-9 p.m. and Saturday April 3rd from noon – 3 p.m. and 6-9 p.m. The events are open & complimentary to the public and all artwork is on exhibition & available for acquisition.  RSVPs recommended at 813-902-1414 or https://www.eventbrite.com/e/world-renowned-drummer-and-rock-roll-fine-artist-john-douglas-to-exhibit-tickets-143994115275.  Please visit www.mmgart.com  for more information.

JOHN DOUGLAS TALKS ABOUT HIS CUSTOMIZATIONS AND ARTISTIC ENDEAVORS

John Douglas has been busy as a drummer, drum tech, artist, and drum customizer—and not necessarily in that order. Sometimes it depends on the day of the week!  It does seem to come all at once!

Not long ago, three of John Douglas long-time clients needed their drums painted/customized at about the same time. This rarely happens all at one time, but in this case Murphy’s Law was in full effect! During this time, Douglas had the opportunity to work on artwork for ZZ Tops’ fiftieth anniversary tour (ABOVE).  Douglas was determined to build a kit for his friend Frank Beard that was worthy of such a distinguished honor. Since it was for ZZ Top’s fiftieth it was a special golden anniversary.  Douglas decided create artwork in 24-karat gold leaf, something he had never done before.

At the same time Alex Gonzalez was gearing up for another big tour with his band Maná and needed a kit done. He wanted to start with DW stainless steel shells, which added another level of labor-intensive prep work. Alex always has a strong idea of what he wants, and it is John Douglas’ job to understand and share his vision. They have been doing Maná kits together for almost thirty years.

Yet before he could start both ZZ Tops’ and Alex Gonzalez’ kits, John Douglas needed to get drums together for Joey Kramer, who was set to start his Aerosmith Las Vegas residency on April 1. Douglas has been Joey’s drum tech for the last six years, so he knew what he wanted: BLING! Douglas started with Pearl Masterworks shells in black and proceeded to glue more than 50,000 Swarovski crystals on the shells—one at a time. This process was very tedious. The design was a playing card theme—large diamonds, hearts, spades, and clubs on the shells in multi-colored stones. When the stage lights hit it, there is nothing like it!

While painting and customizing drums is the natural culmination of John Douglas’ two greatest passions in life—art and music—his true artistic love is painting black and white portraits on canvas. He always carries minimal art supplies he tours, a roll of canvas, black paint, white paint, and a few brushes. And that is how he spend my days off, painting rock ’n’ roll portraits on canvas taped to the hotel room wall. This keeps him creative, productive, and kills lots of time on days off. This seems to be vital for John Douglas to maintain a healthy tour lifestyle.

Fast forward to when they were about to start the Aerosmith East Coast run of “mini-residencies” when Joey hurt his right foot (again, John Douglas fills in). He ended up playing all nine shows of this leg of the tour, again with no prep time. Before this year it had been a long time since he played a full throttle two-hour rock show with any band, let alone a band of this Aerosmith’s magnitude. John Douglas said that the first few shows were physically and mentally draining. It simply was a miracle that he could pull it off at all.
Not only is John Douglas’ artwork of rock and roll icons some of the most famous and highly collected among celebrities and art enthusiasts around the world, but Douglas has toured the globe with multi-platinum musicians including ZZ Top, Slash, Van Halen and Bon Jovi. He is just back from playing the Grammy’s and MusicCares with Aerosmith and is currently on tour with Aerosmith in their Las Vegas Residency.   Along the way, he has created one-of-a-kind masterpieces of rock and roll icons including Joe Perry (Aerosmith), Stevie Nicks, Dave Grohl (Foo Fighters), Bono (U2) and The Rolling Stones.  These original works of art (several signed by both Douglas and the Rockstar subject) are …in a word…extraordinary.

Way back in 2001 I painted what is widely considered Joe’s most famous and iconic guitar, known as the “Billie” guitar. It features a portrait of his wife Billie painted on the front and back. It has been photographed and featured on the cover of just about every music publication. I thought it would be cool for me to paint a portrait of Joe playing that guitar …for myself. You know…. a portrait of Joe playing the “Billie” guitar painted by the guy that painted the “Billie” guitar. So, in my spare time I did just that. When I finished it, I contacted Joe’s guitar tech and asked him if he could get Joe to sign it for me. He said “we are up at Joe’s house now recording his next solo album. Send it up here and I’ll have Joe sign it for you”. So, I did that. Apparently, Joe took one look at the painting and said, “that’s my album cover!” The Hard Rock now owns the original.

Douglas’ art can be seen in many Hard Rock Café locations as well as their corporate office and is on exhibition and available for acquisition at renowned art galleries throughout North America.   His life, journey and story are one that is fascinating amongst rock stars and collectors alike.

He also painted many guitars including the famous “Billie” guitar for Joe Perry of Aerosmith. Eventually he started working for these bands as a drum tech. While on tour with rock and roll’s biggest icons, Douglas paints portraits in his hotel room. This keeps him creatively satisfied and helps to pass the time and loneliness of being on the road. Another recent masterpiece completed by John Douglas is of Rock & Roll Hall of Famer Jon Bon Jovi. MusicCares where Aerosmith was honored as the Person of the Year…John Douglas has been getting ready to continue his 2021 North American Art Tour.